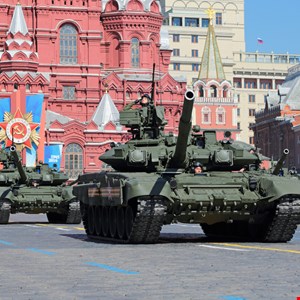 Russians tuning in to view the country’s Victory Day parade today were shocked to find anti-war messages after the country’s television listings system was hacked.

The hack affected several major networks, including Channel One, Rossiya-1 and NTV-Plus, the BBC reported.

The name of every program was replaced with a message stating, per the BBC’s translation: “On your hands is the blood of thousands of Ukrainians and their hundreds of murdered children. TV and the authorities are lying. No to war.”

The message was reportedly featured on Russian networks from Sunday night.

“Tonight, TV viewers saw provocative anti-war messages instead of the program guide and channel descriptions on their TVs,” a tweet from Gazeta.ru read. “MTS, Rostelecom and NTV-Plus, as well as the Yandex TV program, were attacked by hackers.”

Russia’s Victory Day celebrations is a national holiday and military parade watched by President Vladimir Putin and televised in Russia. The annual event celebrates the Soviet Union’s victory, alongside Allied forces, over Nazi Germany in 1945.

Many speculated that Putin would use the Victory Day celebrations to propagandize or bolster his position around Russia’s invasion of Ukraine. However, his speech concluded without the expected declaration of mass mobilization or war against Ukraine.

It is unclear who was behind the hack, but the hacker group Anonymous retweeted Scarr’s tweet with the message “Good morning Moscow” within hours of the hack.

On February 25, Anonymous declared a “cyber war” against Vladimir Putin’s government in response to Russia’s invasion of Ukraine. It has since claimed to have taken down several Russian state websites, such as the State Duma, as well as the website of the Russian-state-controlled international television network RT. In March, the hacktivist group claimed to have leaked over 360,000 files from the Russian federal agency.